The MTA Finance Committee will be voting at 1:30 TODAY
to consider another 20% cut in already-cut bus service

When the Bus Riders Union brought the MTA to court in 1994 we charged them with Transit Racism for cutting bus service and eliminating the $42 monthly bus pass. We went to federal court, won a Temporary Restraining Order in which the courts agreed the service cuts and fare increases violated Title VI of the 1964 Civil Rights Act. Today the MTA continues transit racism as they have cut bus service by 35% since the Bus Riders Union and MTA increased bus service hours to 7.5 million. Today, with 100,000 more riders the MTA has cut bus service by 35% and now wants to cut in another 20% Black and Latino bus riders cannot get to jobs that are being cut, food that is being cut, families that need their help whose benefits are being cut, if the damn MTA cuts their bus service. The way to get more riders is to put on more service. The way to cut bus ridership is to cut bus service. The MTA has contempt for its passengers and is contributing to why Black people, once 25% of the city’s population are now 9% and Black students once 25% of the school district are now 8%.

Demand that MTA stop all further service cuts and move to double bus service that will double bus ridership! Mark Ridley Thomas is running for city council. He is a county supervisor representing a large segment of the Black community. Ask him to please represent that community and all bus riders by voting now on the service cuts and introducing a motion to Double Bus Service Now!

We stand with many groups…. who are also calling for the MTA to stop the Service Cuts Now. 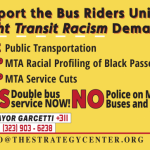 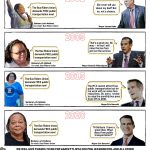