This Wednesday evening, the Strategy and Soul Revolutionary Organizers Film Club is proud to present

“A tribute to George Jackson—patron saint of political prisoners and the Black Liberation Movement:

When I was in prison in 1970 and 1971, in Massachusetts, for militant demonstrations against the Harvard Center for International Affairs—a university/CIA center for counterinsurgency—I first “met” George Jackson through his explosive book Soledad Brother: The Prison Letters of George Jackson. He became my friend, my comrade, as he did for hundreds of thousands of prisoners—he was our teacher, our leader. If he did 1,000 finger-tip push-ups a night, I did 200 regular ones as he kept saying, “Come on Eric, keep pushing.”  When I was in solitary for 40 days and nights he told me, “You can do this. Don’t let the screws break you. This will make you stronger.” And thanks to him, it did.

There is no ways to understand how George Jackson, still locked up in San Quentin at the time, could deeply impact the lives of so many prisoners, mainly Black prisoners but the most progressives and revolutionary ones all over the world. His book Soledad Brother received such critical acclaim that his devoted attorney Fay Stender believed it would be his ticket out of prison. Instead, it contributed to his already imminent death. On August 21, 1971 the prison guards murdered George Jackson.

Fifty years later his life lives on but only through our work and dedication. We have deep appreciation and admiration for Claude Marks and Nathaniel Moore for a truly spectacular online production of 99 Books—a Tribute to George Jackson on the 50th anniversary of his assassination. (use link) Tonight, beginning with George’s brilliant statement on U.S. fascism, “the apex of world fascism” Angela Davis, Stephen Bingham, Yugo Pinell, Eddie Conway, Walida Imarisha, Eric Mann and others will help keep George’s life front and center in your, and our consciousness.

George Jackson, Jonathan Jackson, Black August, Angela Davis, Ruchell McGee, The Soledad Brothers, the San Quentin Six, the Black Panther Party, the Attica rebellion—for many these are simply words and at best, symbols on a T shirt that few understand or study. Let’s spend an evening tonight to celebrate the life of one of the greatest political prisoners as the Strategy Center calls for the release of millions of prisoners including the 1 million Black prisoners in the U.S. today.

This year, the Freedom Archives, led by co-chairs Claude Marks and Nathaniel Moore, generated a very ambitious, magnificent on line project, 99 books, focusing on the 99 books found in his cell after Jackson was murdered by prison guards. It also contains commentaries by movement organizers and theorists about the significance of Jackson’s life. All these video and audio interviews are available on their site: 99books.freedomarchives.org

Featured Videos for the Film Club

For this week’s film club we’ll watch the following selected reflections on the life and legacy of George Jackson.

George Jackson, political prisoner, member of the Black Panther Party, author of the celebrated book Soledad Brother, was murdered by prison guards on August 21, 1971. This year, 2021, and this August, there will be celebrations of his life and work on the 50th Anniversary of his assassination.

audio statement on Fascism. “The United States has taken fascism to its apex. Our only hope is to build new centers of cultural resistance”

Angela Davis—Thoughts on the Significance of George Jackson’s Life “George was involved in collective efforts, political education, and knowledge production.”

Angela Davis worked with George Jackson and the Soledad Brothers political prisoners. She was falsely accused of providing guns for his non-existent escape. She became a symbol of Black resistance, and has been a leading revolutionary intellectual for more than 50 years. She is a founding member of Critical Resistance, a national organization dedicated to the dismantling of the prison industrial complex.

Eric Mann was a field secretary with the Congress of Racial Equality and a political prisoner in Massachusetts. He is the director of the Labor/Community Strategy Center in South Central Los Angeles and the author of Comrade George: An Investigation into the Life, Political Thought, and Assassination of George Jackson.

George Jackson was assassinated 50 years ago on August 21, 1971. The following week, the prison authorities released an inventory of the 99 books in his cell. Using these 99 books, we envision creating a web resource (curriculum/study guide, video interviews) that encourages serious political engagement and a critical internationalist political lens by which to understand his contribution to Black Liberation. We will enhance the curriculum with video comments from people who knew George

Nathaniel Moore is an educator and archivist at the Freedom Archives and the UC Berkeley Ethnic Studies Library. He is active in prisoner support work as well as other projects working to uplift voices of resistance.

Claude Marks is a founder and the Co-Director of the Freedom Archives in San Francisco. Claude has an extensive background in media, culture and activism. He was imprisoned in the US for his support of the Puerto Rican independence movement and his commitment to anti-imperialism. 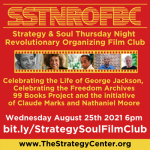 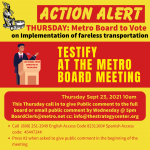 Metro will Implement an Apartheid Transportation System this Thursday, Are you Ready to Fight?Actions, Bus Riders Union, Fight For The Souls OF The Cities, Free Public Transit Campaign, The Labor Community Strategy Center, Upcoming Events