No Directed by Pablo Larraín

Where glad to have two great breakthroughs in the last two weeks. First we launched the Strategy and Soul Block Party series on a great start–visit www.thestrategycenter.org to see pictures and rsvp for the Next Block Party on December 19th.

Second, Black people, Women, Latinx people, the Movement defeated the fascist in chief! There’s still much work to be done to restore, protect, and expand, and protect our civil rights, but this is a great break from outright fascism.

NO is a wonderful film starring Gael Garcia Bernal about the movement to bring charges against the dictator Augusto Pinochet in Chile. Pinochet, backed by the United States, waged a coup against the democratically elected government of Salvador Allende, rounded up and imprisoned every trade unionist, socialist, communist, and human rights fighter. He assassinated more than 3,000 people, tortured more than 30,000 and arrested more than 150,000 people. Under international pressure, he agreed to have a “democratic” referendum to legitimize his regime and essentially name him president for life. Gael Garcia Bernal comes in as a jaded advertising agency shill who slowly comes to see that the movement against the dictatorship is essential and Pinochet has to be defeated. He brings humor, vitality, and energy to the campaign, making “Yes:” on “No” a funny, powerful, and decisive political statement that the masses embrace. There is some caricature of the “old left”— that is, the most heroic fighters who fought for deposed president Salvatore Allende before he was killed, and who risked their lives and were murdered by Pinochet, and yes, the communists—as dogmatic and ineffective. We also think it validates their role as the true leaders of the movement. ONE is ultimately an effort to appreciate both elements of a new movement. Spoiler Alert, this really happened, and yes the “No” forces won with a “No” vote of 55 percent and a “yes” vote of 43 percent. Although rejected by the electorate, Pinochet remained in office until free elections installed a new president, the Christian Democrat Patricio Aylwin, on March 11, 1990.

Today’s movement needs to know so much more about the wonderful Chilean Salvador Allende who was elected president of Chile on September 4, 1970 as a Marxist and friend of Cuba in November and was overthrown by a U.S. backed and initiated military coup, ironically, on September 11, 1973. We will talk more about the great man, Salvador Allende in future films and discussions.  Let’s be clear. The U.S. government has contempt for free elections and is committed to overthrowing every government in the world that is mildly socialist or anti-U.S., or just independent. As Henry Kissinger wrote to defend the U.S. plans to overthrow the duly elected  Allende, “I don’t see why we need to stand by and watch a country go communist because of the irresponsibility of its own people.”

Today, a fascist dictator in the While House, having been defeated by a resounding 5 million vote rejection of a sitting president, and a clear Electoral College defeat, is holding onto power because he believes as does Kissinger, “I do not plan to step down because of the irresponsibility of our own people.” But make no mistake, it is not time to criticize Trump, it’s time to look in the mirror and to stand up to fascism and be part of a mass democratic movement that will have to force him and his armed supporters, to step down.

We urge you to become a regular member of the Strategy and Soul Thursday Night Revolutionary Organizers Film and Book Club. We ask you to PLEASE become a Sustainer of our work. 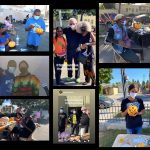 Thank You for coming to the BRU Pre Election Victory Block PartyBus Riders Union, Fight For The Souls OF The Cities, Strategy & Soul, The Labor Community Strategy Center, Upcoming Events 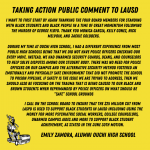