Columbus Day, like Hitler’s day, Ku Klux Klan day, and Donald Trump day is a day of infamy that should be cancelled once and for all.

The Strategy Center is a multi-racial, Black/Latino@, center for leadership development, movement building, and a National Leadership School for Strategic Organizing located in South Central Los Angeles—a scene of one of many U.S. genocides.

Our politics are Black Liberationist, Pan Africanist, Third World internationalist, women’s liberation, anti-fascist,with a pro-communist anti-imperialist worldview. We come out of the great revolutionary traditions of the U.S. Communist Party and its Black-led We Cry Genocide statement written by William L. Patterson in 1951 and still completely relevant today. We come from the Congress of Racial Equality (CORE) that carried out the Stall-ins to block the highways of the 1964 World’s Fair in New York and the Mississippi Freedom Democratic Party that challenged the racist Democratic Party at its 1964 Convention. We are part of the traditions of  the Black Panther Party, Brown Berets, the Red Guards, and the American Indian Movement and its brilliant siege of Wounded Knee in 1973 and Pine Ridge in 1975. We call on President Biden to release Leonard Peltier and all AIM and Native political prisoners now.

We work to integrate the history of the Native peoples into our organizing work and to support Native/Indigenous demands such as the Standing Rock movement.  A key part of our work is trying to integrate the ongoing ideological struggle against European and U.S. genocide into the training and political education of primarily Black and Latin@ organizers in the high schools and communities. We teach young organizers that the U.S. is an imperialist white settler state. We agree with Aimee Cesaire that  “Europe and the U.S. are “indefensible.

To continue that objective, when the gifted film-maker Lucas Johnson Yahraus directed The Revolution will be Strategized, the documentary on Thirtieth Anniversary of the Strategy Center in 2019, our director, Eric Mann wrote and performed the initial narration:

Once upon a time, in the real world, for 14,000 years, the people that we will now call Indigenous built some of the most advanced civilizations in the world. They had great scientific developments—architecture, irrigation, and great human contributions—public health and communal benefit.  They had wars, they had cruelties, but they didn’t have genocide. They didn’t wipe each other out.

In 1492, somewhere near Granada, in Spain, the Spanish government, monarchy, which was reflective of all of Europe based on capitalism, imperialism, and Catholicism, carried out three sins simultaneously. The biggest sin was the genocidal invasion of the Americas. The second sin was the Spanish Inquisition against the Jews. And the third sin was the driving of the Black and Arab Moors out of Spain—all in 1492. These were not isolated atrocities but a campaign of mass hatred, racism, and mass extinction. These European barbarians came to the Americas and they brought their unique contributions— Capitalism, Catholicism, Christianity, Imperialism. syphilis, smallpox, and alcohol. They saw an advanced Indigenous civilization in front of their eyes, had complete contempt for it, and in some absolutely unbelievable reality, murdered 90 million people out of a hundred million people in 100 years.

We are paying for this sin of 1492 today. We all go back to 1492, and we all have to reverse 1492. Because since 1492, the task of every civilized person in the world was to stand up against European Christian capitalist barbarism, to dismantle it, and overthrow it.

This narration did not just “frame” the film after which we went back to “grassroots organizing—that we never do. Rather, the theme was brought right into the present by Shepherd Petit, a leader of the Bus Riders Union for 20 years, a disabled Black man, and a veteran of the Detroit rebellions of the 1960s. As Petit explained,

It would take the unity of all people of color, not just Black people to unite, because we have a common goal to meet, and that is racism in America because this is a white settler state.

We urge you to reach out to and support the many Indigenous experiments that are on the front lines of the Battle. We begin with The Red Nation Blog, Red Nation Ten Point Program, and Red Nation Podcast available at Red Nation.org

Your friends at the Labor/Community Strategy Center

Please, we welcome responses at info@thestrategycenter.org 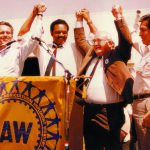 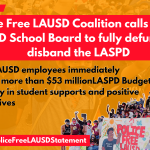 Police Free LAUSD Coalition calls on the LAUSD School Board to fully defund and disband the LASPDActions, Bus Riders Union, Fight For The Souls OF The Cities, The Labor Community Strategy Center