The Spook Who Sat by the Door

Shown in 1973, for a few minutes before censored. The Spook Who Sat by the Door, is a brilliant parody of Blaxploitation that is in fact a revolutionary manifesto for infiltrating the White Man’s power structure. In one of the great lines in film history, when asked how he can get past the security of a highly fortified office, one of the Black revolutionaries explains, “A Black man with a mop and a pail can get in anywhere.”

Written by Sam Greenleee, produced by Ivan Dixon, the lead in another great film, Nothing But a Man, Spook is a continuation of our Fanon, Third World series that began with Concerning Violence, and so far, has proceeded to The Battle of Algiers. Without even knowing the direct lineage, film reviewer, J. Hoberman, in the September 18, 2020 New York Times made the direct connection with Fanon and Algiers.

“But, if “Spook” is a cartoon, it’s one animated by the ideas of the radical psychiatrist and champion of decolonization Frantz Fanon. The movie is an analog to anti-imperialist films like “The Battle of Algiers,” albeit in the guise of a blaxploitation cheapster, which is how it was presented to the distributor United Artists to secure completion money.”

Join us this Thursday night at 6 PM. As we support the liberal and at times neo-colonial forces against the fascist ones, we need to find space for a clear anti-racist, anti-imperialist perspective.

Registration Note: We’re changing the way we track registrations, as such we’ll need to cancel the link used for all upcoming meetings. For future meetings of the Strategy and Soul Film and Book Club including this Thursday’s meeting on October 29th 2020 @ 6pm please look for an email later today from info@thestrategycenter.org with instructions on registration for the next meeting. Anyone who registered yesterday October 25th or today October 26th for the October 29th 2020 Film and Book Club meeting will remain registered, and will be emailed an updated link later today. if you registered prior to these dates, your registration will be canceled, and instructions will be emailed to you on how to confirm your registration.

Register Now for the Zoom Link 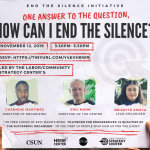 How You Can End the SilenceArticles 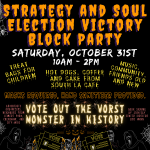