At 11 PM on Tuesday June 30 — after 13 hours of public testimony and board deliberations and yes, years of organizing — the Black Lives Matter and Defund the Police movement in Los Angeles and nationally took a great leap forward. The Los Angeles School Board, led by Board Member Monica Garcia, with the support of board members Nick Melvoin, Kelly Gonez, and Jackie Goldberg, voted 4 to 3 to cut the $70 million a year budget of the Los Angeles School Police Department (LASPD) by $25 million — 35% — and move those funds to programs focused on the needs of Black students. This reduction in the department’s funds will potentially lay off 65 armed officers and cut the department’s overtime budget. We know of no other Defund the Police campaign in a major U.S. City that has made such a major political and material breakthrough — in this case, Los Angeles City, with 4 million residents, 650,000 students, and the second largest school system in the U.S.

Our campaign was also a major ideological victory. It delegitimized the very existence of police in the public schools and affirmed the experience and demands of the most militant and conscious Black students. The LA School Board meeting, with hundreds of demonstrators outside, 50 people inside the board room at a time with only board member Monica Garcia in person, and several thousand supportive viewers on closed circuit TV was a site of the most intense ideological contestation with the entire system of anti-Black colonial education. Dozens of angry, articulate, and organized Black students — many from Students Deserve — testified that the very presence of police in the schools was a racist and anti-Black attack on their racial identity, self-worth, self-confidence, and academic performance.

Read the Full Article on Counterpunch 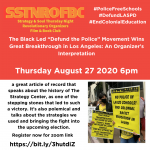 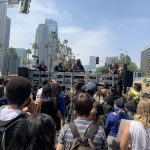 With great appreciation to the great organizers and organizations that won our victory to cut the LASPD Budget by $25 million—35 percent.Articles, Bus Riders Union, Campaigns, Channing Martinez, Eric Mann, Fight For The Souls OF The Cities, Free Public Transit Campaign, School to Prison Pipeline, The Labor Community Strategy Center