The journey of consciousness of a revolutionary auto worker

In 1981, Eric Mann, as a communist labor organizer, was hired at the GM Van Nuys Plant, at the time employing 5,000 workers making the Chevrolet Camaro and Pontiac Firebird. Soon, the plant was threatened with a closure by General Motors. Mann invented and initiated the Campaign to Keep GM Van Nuys Open, a pathbreaking labor/community coalition led by Local 645 President Pete Beltran, Mark Masoka, Jake Flukers, Kelly Jenco and hundreds of GM Workers along with community allies Father Luis Olivares, Rev. Frank Higgins, and then assemblyperson Maxine Waters. The movement, threatening GM with a boycott of its products in LA, the largest new car market in the U.S., won an unprecedented agreement with GM. GM agreed to keep the plant open for at least 3 more years that eventually extended to a full decade for a plant workforce that was 50% Latinx, 15% Black, and 15% women. Filmmaker Michal Goldman magically captured that movement in the film Tiger by the Tail, that won Best Labor Film at the New York Film Festival,  that we will show Friday night July 12 at 6 PM.

Since then, Eric Mann, Chris Mathis, and other UAW workers became aware of the great environmental harm that the auto causes and as the growing climate crisis intensified, Eric and the Labor/Community Strategy Center have initiated the No Cars in L.A. Campaign. Eric will discuss, along with many grassroots leaders, why he changed his understanding of the auto and why autoworkers all over the U.S. should work against their short-term interests for free public transportation and no cars to protect the long-term interests of their families, their communities, the people and the planet.

An award winning film by Michal Goldman about the movement

$25 donor tickets to support our work 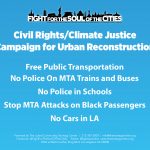 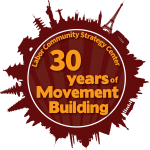