The Bus Riders Union Calls on the Metro board to cease and desist all Anti-Black policies Immediately!

Fight on the side of the BRU

This Thursday Dec 2nd at 10am

At the Metro Board Meeting

This Thursday, December 2nd, 2021 at 10 AM the Bus Riders Union will be introducing the following motion and asking MTA board members to send it to the CEO for implementation

“The MTA Board acknowledges that after decades of protest and charges, there is an undeniable anti-Black impact and possibly intention in all MTA policies. We call on CEO Stephanie Wiggins to initiate a task force to investigate every possible element of anti-Black ideology and policy throughout the MTA and report back to the board with structural and systematic remedies to end all forms of anti-Black policy.  We begin with the irrefutable conclusion that regardless of intent, the MTA policies are objectively anti-Black and radical steps must be taken to reverse that problem. We also acknowledge that if the Bus Riders Union and other civil rights groups have brought this problem to our intention at least since 2013, that the persistence of this problem reflects some level of intentionality since remedies existed to reverse them.

In that both fare collection and code of conduct enforcement have shown themselves to be inherently anti-Black by the outcomes, MTA agrees to not enforce either the fares or the code of conduct permanently the institution looks to find alternative solutions.”

Join the BRU in taking the following actions to support this motion:

Give Public Comment on Thursday In your comment please help us in reading the motion into the minutes and voicing your support for the motion. If you’re representing an organization, please tell board members that you’re organization is in support of the Bus Riders Union motion.

Send an email to your board member on your Organization’s Letterhead. Find a template letter here: BRU Letter of Support https://bit.ly/3G3bew0

Let’s begin with the income figures. 58% of all Black families have income under $25,000 but even worse, 30% of all Black families have under $5,000 a year. What in the world are they supposed to do? With no or fragile housing, starvation income, even the implementation of free public transportation can’t solve all their problems. But it can at least give them the chance to move around the city and county to make some sense and hope out of their lives. Fare “enforcement” or even “collection” is a cruel and unusual punishment. We hope you agree.

Another figure that should give us pause is that while Black people constitute 8% to 9% of LA County and City residents they are more than double that representation on MTA buses and trains—the last figures we were are 19% of all MTA passengers. That reflects that Black people as a group cannot afford cars (thus are “transit dependent”) and can’t afford fares for public transportation either.

Then, let’s look at “fare evasion citations” which given the data above, should just be called “can’t afford the fare” citations. According to MTA data. in 2018 53% of the passengers given tickets or fare evasion were Black even though they are 19% of all MTA riders. This is not “disproportional” but egregious and intentional discrimination. We believe this racially discriminatory use of federal funds violate Title VI of the 1964 Civil Rights Act. We do not have to agree, to agree that the problem must be solved immediately.

In 2019, 53% of the passengers cited for fare evasion were Black while, positively, fare evasion citations were reduced to 8,700

In 2020, 53% of the passengers cited for fare evasion were Black, even though the total was reduced to 1876. This is beyond incredible that the MTA, regardless of its policies, will cite 53% of its Black passengers with statistical certainty one clear reflection of intentionality.

Now we move to “fare evasion warnings” (we ask this contrived violation be clarified). But almost like clockwork,

2018—44% Black, more than double their percentage in the population

We hope you agree that the statistical certainty is terrifying, only a premeditated anti-Black policy can have virtually identical outcomes

Then we move to LAPD “suspect arrest data”

2020 56% of all arrests by LAPD on MTA buses and trains and stations were of Black passengers.

The Black Codes of Conduct must be torn down

You know since slavery every grotesque brutality against Black people has been cloaked in an assault on the integrity and character of Black people to justify such abuses. There can be no such slander allowed and the endless citations for eating, drinking, smoking, litter, spit, urinate, or defecate, smoke, sleeping, entered without payment, gambling, unnecessary noise, throwing objects, drinking alcohol, graffiti, posting signs, breach of peace give MTA police and transit authorities a blank check to cite Black passengers for just trying to live their lives.

Join the BRU in taking the following actions to support this motion:

Give Public Comment on Thursday In your comment please help us in reading the motion into the minutes and voicing your support for the motion. If you’re representing an organization, please tell board members that you’re organization is in support of the Bus Riders Union motion.

Send an email to your board member on your Organization’s Letterhead. Find a template letter here: BRU Letter of Support https://bit.ly/3G3bew0 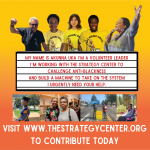 My Name is Akunna Uka and I’m working with the Strategy Center to build a Machine to take on the SystemFight For The Souls OF The Cities, Fundraising, Strategy & Soul, The Labor Community Strategy Center