Concerning Violence is a brilliant film of some of Franz Fanon’s most stirring formulations of the profound violence of U.S. and European imperialists and portrays actual struggles of colonized people for national liberation. It is brilliantly narrated by Lauryn Hill. The film has 9 different stories but each one begins with a quote from Franz Fanon’s The Wretched of the Earth read by Lauryn Hill as if she is channeling Fanon. Fanon was. and remains the most trenchant, clear and militant supporter of the armed struggles and revolutionary movements in the Third World. Since the anti-colonial movements of the 1950s through 1970s many of those countries that won formal independence have been integrated into the imperialist world economy and some of their ruling classes in the Third World are building structures of new industries. Fanon sees this as neo-colonialism and self-colonization where the new only replicates the old with the colonial relationship kept intact. As we witness an endless wave of violence by the police state against the Black community the Strategy Center believes that Black people constitute an oppressed nation inside the U.S. oppressor nation with the right of self-determination up to and including the right of secession. During the 1960s and 1970s many Black groups were deeply influenced by Franz Fanon including his view that the colonized subjects can only realize self-actualization as part of a militant national liberation struggle. Malcolm X set the tone of Black people trapped inside the United States and needing their own institutions and an internationalist Human Rights frame that challenged the legitimacy of the U.S. itself. At the National Black Political Convention in 1972 the slogan of that broad united front of Black people was “its nation time.” The Strategy Center and Channing Martinez’ successful independent campaign for city council has pushed demands for a 50% cut in police and working to build a Black/Latinx/Third World Alliance. Franz Fanon and Concerning Violence is a challenge to us all to see firsthand the profound violence of the colonial oppressor and calls for even greater violence by the oppressed. Franz Fanon is a brilliant theorist and strategist and the film will not just raise your consciousness, as it does for me every time, but challenge all of us to examine our own work through an anti-imperialist frame. 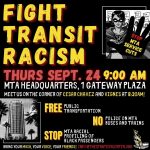 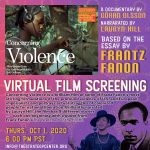