The Film: Finally Got the News; The Story of the League of Revolutionary Black Workers

Framed by Robin D.G. Kelley Author of Hammer and Hoe: Alabama Communists in the Great Depression And Race Rebels: Culture, Politics, and the Black Working Class.

Post Film Conversation lead by Eric Mann, Author of Comrade George: An investigation into the Life, Political Thought, and Assassination of George Jackson And Taking On General Motors: A Case Study of the UAW Campaign to Keep GM Van Nuys Open.

Comments and Conversation by Film Club members-That means you! ~Via Zoom. RSVP: 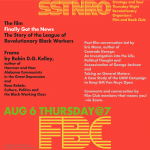