The Historic 1968 Struggle Against Columbia University

How a Black United Front in Harlem, the Students’ Afro American Society,

and Students for a Democratic Society took on the Columbia University Ruling Class, Mayor John Lindsay, the New York Times, the NYPD—and won!

“There are decades where nothing happens; and there are weeks when decades happen.” – V.I. Lenin

The Columbia University Struggle of 1968, 50 years ago, was in fact a Struggle against Columbia University—as a ruling class slumlord, a racist gentrifier against the people of Harlem and Morningside Heights, and a genocidal war criminal carrying out weapons research against the People of Vietnam. It was one of the great miracles of the times that students who had been recruited to support The System turned against it and sided with the Black community and the people of Vietnam.

The Struggle against Columbia was carried out by The Movement—a Black United Front in Harlem including Harlem Tenants Association, Morningsiders United and Harlem CORE, the Students’ Afro-American Society and Black Students of Hamilton Hall, Students for a Democratic Society at Columbia, and national groups like Student Non-Violent Coordinating Committee, SDS, with support from the national civil rights and anti-war movements.

The Movement demanded that the University stop construction of a gentrifying gymnasium in Morningside Park, opposed by the residents of Harlem and Morningside Heights, who called it Gym Crow, and that it also withdraw all institutional ties to the Institute for Defense Analyses (IDA)—a Department of Defense think-tank that developed weapons to use against national liberation and communist insurgencies including the people of Vietnam. The Columbia University administration, after a two-month struggle, acceded to the core demands of the struggle—an unequivocal victory for The Movement at the time.

We welcome you to attend our talk in New York

Monday March 23 at the Brooklyn Commons 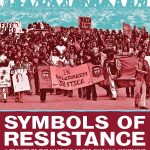 Symbols Of Resistance: A conversation with Claude Marks, and Eric MannStrategy & Soul