By Eric Mann
Posted December 4, 2015
In 4 Articles on Climate, Articles, Cop21
Posts From Paris: The World is on Fire but the United Nations is Not2015-12-042017-10-11https://thestrategycenter.org/wp-content/uploads/2017/05/lcsc-logo-white.pngThe Labor Community Strategy Centerhttps://thestrategycenter.org/wp-content/uploads/2015/12/n-climate-change-large570.jpg200px200px

The World is on Fire. But can the governments of the world put it out? I am here in Paris at the United Nations Framework Convention on Climate Change. This is a critical struggle by the world’s governments to see if we can protect the planet from the ravages of the capitalist economic system. The United States and Europe are the very governments that started the fire and are still pouring gasoline on it as they speak. This would be pretty ironic if not funny—if the future of every living thing on the planet and the planet itself was not at stake.

As I do my daily reports from Paris I take the UNFCCC very seriously. I am here as an NGO delegate, an organizer, and a journalist—trying every means necessary to be part of the solution. I watch the governmental leaders and their foibles, pretensions, and climate crimes and observe every possible contradiction among them. I am amazed at the human species’ unique capacity for the rationalization of their own interests in the face of storms, droughts, floods, famine, mass migration, and untold suffering.

And yet, these governments are our best solution. It will take state power to dramatically and rapidly end, not reduce, greenhouse gas emissions. It will take social movements to force the state to in turn force society—corporations, churches, unions, and individuals, to end the fossil fuel world before it ends the world itself. Force is the key.

The climate wars are life and death affairs. They are reflected in real negotiations, real people, real governments, real numbers, and real words.

The most important number of all is the temperature of the world as measured in degrees Celsius. The warming of the earth from the burning of coal, oil, gas, and other fossil fuels began in 1750. It has been measured since the Christian, European, U.S. imperialist Industrial Counterrevolution in 1850. In that time the earth has heated up .25 C and then .5 and then .8 and then just now 1 degree Celsius. That one-degree is catastrophic. The Climate disaster is here now—especially for the people of the Third World and Global South who did little or nothing to cause it but, continuing the cruel logic of imperialism, are the ones to suffer its consequences the most. The world’s governments claim to be developing plans to cap that rise in heat to 1.5 degrees maximum. Sadly, we all know that is a lie. From everything I understand 1.5 C is already baked into the pipeline. Then they say, “Well, 2 degrees is the wall we cannot breach.” Great, but then, and this has scared the hell out of me, when I first started to go to the U.N. preparatory meetings in Bonn, I heard from progressive climate justice organizers both in governments and NGOs “When do we say out loud that 2 degrees is virtually impossible to attain unless the governments move to zero emissions now.” Truly terrifying stuff. So now, everyone understands that the weak agreements proposed here in Paris, through “Intended Nationally Determined Contributions” (which means every government can make up any number it wants to say the percentage of Greenhouse Gas emissions it plans to cut) even if implemented, will lead us to a 3 degree world—with mass starvation, migration, and for many countries in the Pacific Islands and Africa the threat of extinction of their culture and peoples.

So, the numbers that must be used to counter these numbers are 50 percent, 70 percent, and yes, 100 percent of 1990 levels of emissions by 2025, 2030, 2035—that is how urgent and immediate the challenge is and what will be required. That is why my organization, The Labor Community Strategy Center’s proposal that President Obama agree to cut U.S. GHG emissions by 50 percent of 1990 levels is both radical and moderate—radical by the present political expectations, moderate by what nature and science demands.

Another set of numbers and words are: Climate debt, reparations, finance, loss and damages. The nations of Third World—called the G77 and China inside the U.N. and now comprising 134 nation states—are calling on the United States and the European Union to make massive contributions to a Green Climate Fund—at least $100 billion a year, to finance their transition to clean economies. President Obama, in his address to the U.N. on Monday, has, for the first time, indicated some U.S. historical responsibility for “creating the problem” of the climate crisis. This is an important ideological concession—because organizers can use that admission to push for far stronger measures. But he is only proposing to contribute $300 million to $500 million to the Green Climate Fund. My organization and others are calling for at least $10 billion a year from the U.S. The President can’t say he is sorry but then refuse to pay up.

Another critical concept is “Per capita emissions. The United States refuses to accept its responsibility as the primary cause of the climate crisis and its actual role in past and present emissions. Moreover, President Obama refuses to use the concept of per person emissions of U.S. society to explain its present role. The United States has 5 percent of the world’s people and yet generates more than 25 percent of the world’s emissions. And this does not count emissions from the U.S. military—a subject I’ll revisit later in greater detail. When President Obama told the world leaders at the U.N. —as if he was making an admission— that “the U.S. is the world’s second largest emitter” of Greenhouse gases that was in fact a dig at the People’s Republic of China—now the world’s largest emitter. This was another case of American Deceptionalism. What President Obama needed to say was, “As the president of the world’s largest emitter of greenhouse gases per capita and the far worst polluter in world history…” instead, he again moved to put the onus on China and India.

Now, in my view China and India have far more responsibility than they choose to address. I also want to at least question the entire idea of “development budgets” for such highly polluting countries and challenge India’s statement they have “the right to pollute.” But, China and India are absolutely right in arguing that the United State and Europe who have dominated the world and their nations for centuries must cut their emissions to zero and move massive funds to the developing nations for a decarbonized development model. They are also right to criticize president Obama for refusing to address that the U.S. still generates the most GHG per capita and is politically deflecting from that to avoid U.S. responsibilities to the world and planet. We are calling on President Obama to cut U.S. GHG emissions by 50 percent of 1990 levels by 2025—starting now. That is where real demands come in—right now after all this talk the President is only proposing a 14 percent reduction in U.S. emissions—a recipe for disaster. If George W. Bush had done it the world would have been up in arms but President Obama is the master of cool and cooptation and there is no organized opposition let alone outrage at his maneuvers.

So where is the climate justice revolution? Apparently not at the U.N. So far, my great hopes of helping to join let alone help lead a grassroots climate justice revolution in Paris have not been realized. The UNFCCC is quiet, passive, half dead. Seasoned veterans of U.N. fights—and I guess now I’m among them— talk about the Women’s Conference in Beijing in 1995, the World Conference Against Racism in 2001, as hotbeds of organizing and protests where the daily life of the meetings was rockin’ and rollin’.

Now the place looks more like a museum or mausoleum. The grassroots groups have been suppressed in the streets of Paris and restricted at the U.N. site. Most of the establishment NGO groups, the vast bureaucracies of each country, and tens of thousands of climate tourists are visiting exhibit spaces for zero emission limousines, clean fuel mansions, and solar powered vibrators. The whole thing, as Strategy Center organizer Channing Martinez observed, is like a shopping mall where white Europeans discuss the end of the world over cafe and baguettes—with a terrifying calm.

But we hope this is the calm before the storm.

The government of Bolivia plans to raise major protests to demand that the U.S. and others stop the production and consumption of fossil fuel emissions now—-leaving the oil, coal, and gas in the ground.

The G-77 and China threaten a major struggle over climate debt and what they believe is their right to develop while the U.S. and the E.U. must stop in their tracks.

So, finally, while the revolution may not be televised—I will be.

Also, Free Speech TV, Sunday, December 6 at 12:30pm, and December 8. I want to thank Laura Flanders for being one of the few people in the media who really understands organizing and organizers.

So my friends and comrades, This is Eric Mann on KPFK Pacifica with my Posts from Paris—I’ll keep you posted.

Eric Mann is an NGO delegate to the United Nations Framework Convention on Climate Change representing the Labor/Community Strategy Center. He will be doing daily “Posts from Paris” for Pacifica and his KPFK radio show, Voices from the Frontlines, www.voicesfromthefrontlines.com His new book, Katrina’s Legacy: The Black Nation and the People of the World Confront the U.S. Empire and Its Genocidal Climate Crimes will have its international opening in Paris in December 2015 and its U.S. opening in Los Angeles in January 2016. He can be reached at
eric@voicesfromthefrontlines.com 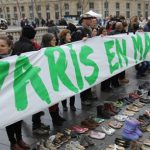