Fred Ho, a renowned baritone sax player, Afro-Asian jazz musician, composer, political organizer, revolutionary died on Saturday.  In 2006, Fred was diagnosed with colorectal cancer and spent the next 8 years battling the disease in the most public and political arenas– reflected in his book, “Diary of a Radical Cancer Warrior: Fighting Cancer and Capitalism at the Cellular Level.” His fight with cancer alone was extraordinary, I have never seen someone live through so much pain, through operation after operation, chemo, and each time, truly arise from near-death– to announce he had “stage 4” cancer and then play an amazing sax solo, give a talk about eco-socialism, of which he was a pioneer, and explain why he was a luddite.

Two years ago, the Labor/Community Strategy Center, organized “An Afternoon with Fred Ho” in Los Angeles—an event that is considered historic by its 100+ participants and many who have heard the program on my radio show, Voices from the Frontlines.  Fred played several baritone saxophone solos, always decked out in super colorful clothes he designed and made himself—which he made sure we knew was his war against the clothing industry.  It was a conversation between Fred, Robin D.G. Kelley, Diane Fujino and me. The four of us are very close politically, all share an Afro-centric socialist view of the world, and the conversation went on for almost two hours—spanning jazz, Black history, eco-socialism, the role of the individual in history, ego formation, the essential role of revolutionary improvisation and the struggle against rigid thinking and dogmatism— the imperative to create, do and say original things. Robin who has written the definitive book on Thelonious Monk: The Life and Times of an American Original and Fred got into a long discussion of 12 note scales and how Fred had tried to break with that form and how he formed a big band to break the form of the big band.  I remember thinking that I barely understood the complexities of their conversation and had so much to learn about music theory. But that was the point—to be exposed to new ideas and to inform my organizing by a constantly expanding constellation of theory.  I most understood the premise that I was taught from the first day I joined the civil rights movement that has guided my work to this day–that breaking the rules is critical to winning the battle of ideas in a struggle with an oppressive system. Diane talked about the the significance of making and writing history, and the critical role the Black movement has played in shaping revolutionary Asian American consciousness—as she has been the author of Heartbeat of Struggle, the biography of Yuri Kochiyama and Samurai Among Panthers, the biography of Richard Aoki.

In the conversation I challenged Fred’s conception that “the old Fred Ho died and the new Fred Ho has been reborn free of egotism” –remarking to Fred that I saw far more continuities in his life than differences and why would he negate such a rich, complex life history. (I tend to do this as well, wanting to believe I have “broken” with a previous view while often there is a leap, not a break, and much of what is “new” is based on much of what I have done before and the historical ideas that have shaped my consciousness.)

What the four of us had in common, was a profound opposition to the entire Eurocentric worldview, what Fred called “manifest destiny Marxism” in which even U.S. socialists talked about their “utopia” as little more than more equitably distributing the spoils of empire. We all shared a once dominant but still relevant view that Black people in the United States are an oppressed nation with the right of self-determination, and an unapologetic Third Worldism in which we shared the assessment of Dr. King that the United States is “the greatest purveyor of violence in the world” We saw the system of imperialism led by the United States as the primary obstacle to human rights, self-determination, and the greatest threat to ecological possibility and the survival of the planet. But most of all it was the type of engaging conversation, discussion, debate, argument, in such a probing and affectionate manner so rare on the left–the type of open ended discussions and inquiries that are so needed for a new revolutionary movement still fighting to come into being.

The New York Times describes Fred’s “Warrior Sisters: The New Adventures of African and Asian Womyn Warriors” (1991), written with the librettist Ann T. Greene combining “the subjects of Chinese folklore, physical combat, domestic abuse, the black power movement and revolutionary feminism.” Ann T. Greene managed Fred’s long journey with cancer, devoted herself to his welfare, and was his representative to the outside world about his illness and organizer of a group of us who supported Fred throughout his journey. It is beyond comprehension what she is feeling now, but for those of us who worked with her for so many years, we witnessed a true angel of mercy, as she was with Fred in the last years, months, weeks, days, hours and minutes.

In that I knew Fred first as a political revolutionary and secondly as a musician, I was often shocked at how influential his music was and the extent of his world-wide recognition. In June 2013 at Fred’s invitation, I came to New York to La MaMa to attend one of the last performances of “Deadly She-Wolf Assassin at Armageddon!” a choreographed martial-arts opera based on the 1970s manga comics of Kazuo Koike. I was in awe to see how he had written a piece in which the narration, music, and martial arts were precisely timed in complete precision. The young baritone sax player, Ben Barson, played Fred’s instrument and music with such energy and power—one of Fred’s students taking center stage while he was alive to see it. That night the cast and friends went to a great Chinese restaurant where they honored Fred and each other. The waiters served course after course and we talked late into the night—all Fred’s events ended with food, drink, and conversation, building community at the cellular level.

Fred challenged me to be more revolutionary and original and challenged the entire 501 c3 culture, including that of my own organization the Labor/Community Strategy center. Our constant struggles helped to clarify and sharpen my own politics and helped us move to the Fight for the Soul of the Cities frame for our work and our No Cars in L.A. campaign.

But given our great unities we also had significant political differences and Fred was principled and generous in his struggles with me. He organized a discussion between us at the National Black Theater in Harlem June 13, 2013. Quincy Saul a member of Scientific Soul Sessions did a very fair and accurate representation of our views.

Eric Mann: An anti-imperialist, eco-socialist future must be grounded in the actual conditions of daily-life and political struggles of working class oppressed nationality populations. People learn and become radicalized through mass, radical, reform struggles, the struggle with the corporations and the state, and the conscious intervention of organizers as political educators bringing theory, ideology, strategy, and tactics to inform that work. We need to build more of these mass campaigns for radical reforms, and do so as revolutionaries, educating about empire, and consolidating victories, concessions and consciousness toward a revolutionary future.

Fred Ho: We need to reject the entire framework of mass society. The practicalities of struggle within this system are toxic, and will literally give us cancer. The accumulation of reforms does not create revolutionary conditions but take us further away from them. The reform struggle deepens colonization to the matrix of modernity. We need to begin an exodus of revolutionary maroonage, where people pull out of the system altogether through the prefigurative production of a future decolonized society.

Still, the evening was marked by mutual affection. We ended our “debate” as Fred called it, with a true embrace, raised held hands, and then we all went out to dinner at a great restaurant in Harlem. (The talks are up on YouTube thanks to film-maker Steven De Castro, whose film, “Jazz, Cancer, and Life: Fred Ho’s Last Year” is in post-production.)

While the system’s leaders of often interchangeable, mass movement’s require many leaders and as many generals and geniuses as we can muster. For us, the loss of a Malcolm or Martin, Harold Washington, Hugo Chavez and Chowke Lumumba before their and our time—and yes, a Fred Ho at 56—are massive blows to the movement.  That is why Fred spent his last years building a new generation of leaders, and his Scientific Soul Sessions, his many bands, his endless students, and fortunately, The Fred Ho Reader, Black Panther Suite, so many cds, DVDs, operas, talks are part of a legacy that must be further studied and appreciated.

In his last months, Fred’s last battle with the cancer finally became a reality to all of us. Fred,  who had defied gravity and mortality, was finally in transition and moved into hospice care in his apartment in Brookly. But having seen Fred truly rise from the dead endless times—this damn painful journey began in 2006! it was still hard to imagine there would be a finite date for the end of his journey. Will to live? Nobody exhibited it like Fred Ho. Will to shake things up, piss people off, get in your face and demand more, often prescient, sometimes arrogant, but  deeply sincere and driven to the bone—absolutely. And for those of us who were his friends and comrades, Fred was a tremendously gentle, generous, and kind man.

For those who knew him and his work we will do everything we can to further popularize and disseminate it. For those who do not yet know who he is and was there will be great joy in discovering him. 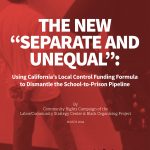 The New ‘Separate and Unequal’Reports, School to Prison Pipeline