by Eric Mann and the WATCHDOG Organizing Committee

L.A.’S LETHAL AIR charts new ground in environmental politics. It targets corporate industrial policy, class relationships, and institutional racism as the primary causes of the ecological crisis. I strongly urge scholars of the environment, urban politics, Black and Chicano studies, and social movements to adopt this book for your courses.”

L.A.’s Lethal Air offers an innovative analysis of the urban ecological catastrophe. Los Angeles is a first and third world city, the majority of whose residents are low-income workers, mostly of color, and it is the largest industrial and auto-dependent city in the U.S. L.A.’s Lethal Air, first written to help galvanize L.A.’s multiracial environmental justice organization, the WATCHDOG, synthesizes environmental health, urban politics, and organizing strategy, and offers a powerful antidote to the toxic nostrums of market-based and corporate dominated environmentalism. It advocates a two-pronged clean air plan of toxic use elimination in major industry and a mass transit system focusing on zero emission vehicles–driven by a long-term movement led by workers, low-income people, women, and people of color.

The chapter titles reflect the methodology:

L.A.’s Lethal Air is used as a text in college courses at more than 20 universities including U.C.L.A., Harvard, Columbia, and York University, as well as by activists from groups such as Greenpeace, the Canadian Auto Workers, and the Southwest Organizing Project.

Beautifully illustrated and written in a compelling style that has led to its adoption in freshman core courses along with classics such as Invisible Man, L.A.’s Lethal Air offers a hopeful approach to grassroots organizing in the age of GATT, NAFTA, and the Invasion of the Body Snatchers. 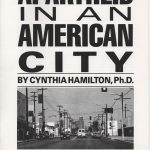 Apartheid in an American City: The Case of the Black Community in Los AngelesReports 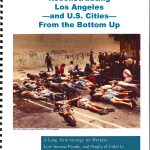