“RECONSTRUCTING L.A. FROM THE BOTTOM UP, calls for massive public investment and social welfare spending, direct income transfers to the poor, mass transportation, a moratorium on police funding, sustainable, environmentally sound development and a challenge to corporate prerogatives and power–as a way of rebuilding the country from the bottom up.”

Reconstructing Los Angeles offers alternatives to the disaster of market- based urban policy: government as a unionized, high wage employer to create an upward pull on wage levels; a “jobs or income now” campaign to challenge the growing structural unemployment of capitalism; government responsibility for income maintenance, housing, and health care for the growing millions of low-income and desperately poor urban dwellers; an environmentally-driven model of sustainable development in which cutting edge manufacturing industries such as electric buses for mass transit must be located in inner city areas; a vibrant public-sector employ-ment base of, for example, pre-school, K-12, and college teachers and teachers assistants; public health treatment for environmental and other diseases through community clinics and hospitals; an explicit rejection of the racialization and criminalization of poverty, in which the African American and Latino communities are portrayed as “criminal” and Latino and Asian/ Pacific Islander immigrants are portrayed as “illegal.” Reconstructing opposes federal police repression programs such as “Weed and Seed” and calls for a “social welfare state, not police state” urban strategy; support for union organizing rights including a ban on permanent replacements and the use of the INS to attack immigrant workers.

Reconstructing Los Angeles–and US Cities–from the Bottom Up is essential for policy makers, activists, organizers, and scholars in government, communities, workplaces, and universities. 1992. 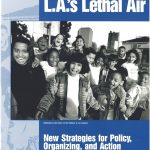