Join The Strategy Center at the Pan African Film Festival

for the Great Film BUS RIDERS UNION by Haskell Wexler

Dear Friends in the Movement,

Please consider coming to a wonderful, inspiring event, this Tuesday evening at 6 PM at the Pan African Film Festival—the showing of the film Bus Riders Union, produced and directed by academy award cinematographer Haskell Wexler. Imagine, Haskell Wexler, who won Oscars for Whose Afraid of Virginia Wolf and Bound for Glory, nominated “One Flew Over the Cuckoo’s Nest,” “Matewan” and “Blaze”), voted one of the 10 most influential cinematographers of all time, chose to spend 3 years of his life with the Labor/Community Strategy Center and Bus Riders Union. Why? Because he was looking for work he considered “revolutionary” and while at another time in history, the BRU would be not considered revolutionary; in the present reactionary climate our demands to “Stop Transit Racism” and Billions for Buses were revolutionary by contrast. Perhaps most importantly, we won! Over ten years we convinced, forced, sued, and pressured the Los Angeles MTA to purchase 2500 new Compressed Natural Gas Buses, reduce the monthly fare to $42 a month, and add 1 million hours of bus service for more than 400,000 bus riders. These riders are more than 50% Latino, 20% Black, 60% women, and overwhelmingly very low-income. Instead, the MTA prefers to build rail lines to nowhere, cost-overrun contracts to reward their friends and campaign contributors, and driving public transit ridership down, down, down.

This is a truly beautiful film and deceptively brilliant in its simplicity. It is a documentary but in very narrative form without a narrator, each character speaks for themselves, thanks to the editing of Joanna Demetrakas, with a gorgeous original soundtrack by Greg Landau, “we are the ones who ride the bus, we are the ones who must decide.” “I ain’t got a car and I live in L.A.” and “The Ballad of Rosalio Mendiola”.

And the characters are real-life movement organizers—Della Bonner, militant resident of Watts, Rosalio Mendiola, a room service waiter and member of Local 11, HERE, Connie Rice, attorney for the BRU from the NAACP Legal Defense and Educational Fund Chris Mathis, a former autoworker and Kikanza Ramsey, Strategy Center organizers, and Eric Mann, lead organizer of the campaign. There are many fine movement films, Selma, Norma Rae, Silkwood, Malcolm, but very few in which the protagonists play themselves in real time.

We especially encourage movement groups in L.A. to purchase tickets, donor tickets if you can, and come for an inspiring evening and important discussion of today’s movement and today’s challenges.  We want to go beyond superficial solidarity where we show up out of reciprocity and instead, show up because we really care. Today, the Strategy Center is fighting for Free Public Transportation, No Police on MTA Buses and Trains, Stop MTA Attacks on Black Passengers, No Police in LAUSD Schools, and No Cars in L.A. Hell, why not, let’s fight for what we really believe in and what society really needs—no matter how difficult the odds. That in itself is a revolutionary idea in the age of Trump and too many Depressing Democrats. Please join us!

Join us for a great film and conversation 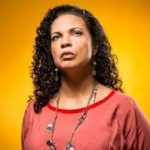 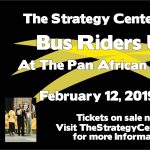