By Channing
Posted August 20, 2018
In Fight For The Souls OF The Cities, The Labor Community Strategy Center, Upcoming Events
The Strategy Center will be attending The Left Coast Forum on Friday August 24th2018-08-202018-09-13https://thestrategycenter.org/wp-content/uploads/2017/05/lcsc-logo-white.pngThe Labor Community Strategy Centerhttps://thestrategycenter.org/wp-content/uploads/2018/08/left-coast-forum-sharon-and-kelly.jpg200px200px

We will all be there! We urge everyone to attend! Eric Mann, Barbara Lott-HollandElmo Gomez, & Channing Martinez

This year’s Left Coast Forum takes head on the challenge that considerations of racial justice need to be infused in every issue progressive communities address.

What better way to begin than with a conversation between Kelly Lytle Hernandez, the author of “City of Inmates – Conquest, Rebellion, and the Rise of Human Caging in Los Angeles, 1771-1965,” and Forum organizer Sharon Kyle:  “A Conversation: Centrality of Race.”

Following that, we’ll be treated to a keynote by Melina Abdullah, Chair of Pan-African Studies at

Cal State LA and founding member and leading spokesperson for Black Lives Matter-LA, who will address the pressing crisis of police shootings with “Black Lives STILL Matter…Especially When White Priviledge Tells You They Don’t.”

And between them, we’ll be treated to Comedienne Mona Shaikh, with her fresh, fearless, eyebrow-raising free speech.

Check out the full program here
Register here
Donations requested.
No one turned away for lack of funds.
Contact us at dick_and_sharon@laprogressive.com 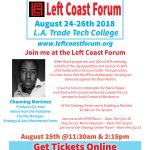