Tell Them We Are Rising: The Story of Black Colleges and University – Friday February 10 8:05pm

(2016/UK/Feature Documentary/121min) Dir: Ceri Dingle & Rob Harris An historical tour-de-force exploring the life, writings and politics of the great Trinidad-born revolutionary C.L.R. James. Using never-before-seen footage of James, alongside interviews with those he knew and eminent scholars, what emerges is an understanding of what it meant to be an uncompromising revolutionary in the 20th Century. For those who know little of C.L.R. James, the author of “The Black Jacobins,” the seminal work on Toussaint L’Ouverture and the Haitian Revolution, this is a great place to start. Trailer: https://youtu.be/Oe2AD_HCGWM

The Black Panthers: Vanguard of the Revolution – Monday February13 6:20pm

(2014/US/Feature Documentary/114m) Dir: Stanley Nelson Whether they were right or wrong, whether they were good or bad, more than 40 years after the Black Panther Party was founded in Oakland, California, the group, and its leadership, remain powerful and enduring figures in our popular imagination. This film weaves voices from varied perspectives who lived this story — police, FBI informants, journalists, white supporters, and detractors, those who remained loyal to the party and those who left it. Because the participants from all sides were so young in the 60s and 70s, they are still around to share firsthand accounts. Trailer: https://www.youtube.com/watch?v=F56O3kZ9qr0 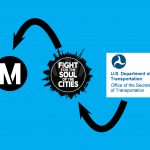