The U.S. Department of Transportation confirmed Wednesday that it is investigating a civil rights complaint alleging Los Angeles Metro and the sheriff’s department have discriminated against black riders by disproportionately citing them for fare evasions.

The Department of Transportation chose to investigate the complaint and alerted Metro late last week.

The complaint was filed in November by the Labor/Community Strategy Center, the parent organization of the Bus Riders Union, and it alleges that in each year from 2012 to 2015, black riders—who make up about 19 percent of bus and rail riders—were handed more than 50 percent of all fare evasion citations.

“This is beyond a level of racial profiling,” said Eric Mann, co-founder of the Bus Riders Union. “This is a level of egregious discrimination against black people.”

In a statement, the strategy center accused Metro of employing “broken windows” and “stop and frisk” tactics, two dehumanizing strategies that involve the aggressive policing of minor violations in an effort to prevent serious crimes. (Studies have shown they are ineffective at reducing crime, and in 2013, when a federal judge ruled that the stop and frisk tactics of New York police officers violated the constitutional rights of minorities, she said, “blacks are likely targeted for stops based on a lesser degree of objectively founded suspicion than whites.”)

“We’re in the process of trying to schedule initial meetings. We are reaching out through our civil rights office this week and will begin the process of addressing all concerns,” she said.

The strategy center has demanded that Metro grant amnesty to all black riders for outstanding citations and that it stop using law enforcement officers to check fares.

The starting fine for fare evasion is $75, a price that can soar to $250 with late fees, according to KPCC.

“If you aggressively enforce fare collection and you have law enforcement involved with it and they have the power to carry out arrests, that in and of itself is what ‘stop and frisk’ means,” he said.

The complaint was filed at a pivotal time, notes Jessica Meaney, executive director of Investing in Place, a small nonprofit working in transportation advocacy, because Metro is in the midst of negotiating its policing contracts.

“We tend to conflate fare enforcement as a way to do safety,” she said, but just because Metro is rigorously policing fares, doesn’t mean the trains and buses are safer.

“It’s no secret many of our communities have faced racial profiling, discrimination, and unfair treatment,” she said. “I’m looking forward to the results of the investigation. Our communities have been plagued by spotty bus and train service, especially in many low-income communities and communities of color. What will it take to create real change?”

Metro is already working to “transition” sheriff’s deputies away from fare enforcement, Goheen said. On January 1, the agency started filling 77 new civilian transit security officer positions to “take on the primary duty of fare enforcement,” and 27 of them, she said, are in the field now.

The strategy center also alleges that:

From 2012 through May of 2016, Metro and the sheriff’s department combined have issued 455,388 citations. Of those, at least 48 percent went to black riders.

Goheen wouldn’t say whether the local transit agency disputes the figures, which Mann said were culled from Metro under a public records act request.

This is the third civil rights complaint the Bus Riders Union has filed against Metro since the union’s founding in 1992. The first accused Metro of grossly favoring rail over buses, leading to a federal consent decree that placed the agency under the supervision of a court-appointed “special master” and forced it to build up its bus fleet. 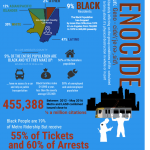 This Is Genocide InfographicDOT Complaint