The Strategy Center urges our members and friends to join Black Lives Matter L.A. for their critical campaign to challenge L.A. District Attorney Jackie Lacey for her refusal to aggressively apprehend and try police involved in brutality and homicide against civilians especially Black people. In her six-year tenure as county prosecutor, Lacey has never filed charges against a police officer involved in a shooting. The Black population of Los Angeles has been forcibly reduced from 750,000 to 350,000 through systematic push out—driving Black people out of the economy and occupying their every breathing moment through police brutality  and harassment. We have to stand up to the racist privatizing, polluting, and policing plan for gentrification and genocide against the Black community led by liberal Democrats! We commend BLMLA for their leadership in calling the question and demanding a positive answer. We will be marching with them and ask you to join them as well. 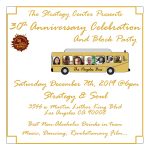