In celebration of International Working Women’s Day and Women’s History Month, and Century, and beyond; we present the great Della Bonner, former member of and revolutionary with the Bus Riders Union. As the Bus Riders Union continues to fight Anti-Black racism on Metro buses and trains, it’s important to ground this fight in the long history of the BRU taking on Metro’s racist policies. As Bonner explains, the Black board members and operators benefited from the Black Civil Rights Struggles of the 1960’s  for the positions they now hold. It’s beyond time to fight for the Black bus riders who have for more than 10 years received 50% of all tickets and arrests each year on Metro buses and trains.

We need your help to call on both to make bold steps to end Anti-Blackness on Metro Buses and Trains. Call each of their offices to tell them to work with the Bus Riders Union, then call us to tell us how it went.Then sign the petition which will send an email directly to their offices.

The militant, Black women’s spirit of Della Bonner is pushing us forward

A 30-Year Ride: My Eyes Still on the Prize

I came to Los Angeles in 1955. I rode the 204 bus on Vermont Avenue, and I only saw white male bus drivers. The riots of ’65 changed that. As a result of the rebellion and the social issues that came to the front, we started seeing bus driver jobs opened up to Black males.

Then white women started to drive the buses. And Black women said, “I don’t want to go out to the Valley and do day work or go downtown to the garment district and do piecemeal factory work when I can drive a bus too.” So we started seeing Black women driving buses. Now, through affirmative action, other people of color, both genders, have been given that employment opportunities and are now part of the drivers union.

Who has benefitted the most from the social rebellion of the mid ’60s? White women! The Black movement for civil rights brought the birth of the feminist movement, and from that the gay and lesbian movements. Now we have many groups asking for a piece of the pie, with Blacks receiving the least. The white man says, “Hey, I shared too much power; I have lost control, I’m going to have to compete with all the rest of those folks on an equal basis. No! We have to do away with affirmative action.” That’s the bottom line. The white man wants to regain the power that he was forced to share.

But once a horse has gotten out of the barn door and has tasted freedom and seen what he can do–seen that he was brainwashed about his constraints–you ain’t gonna get that horse back in the barn. If you get him back in, you’re gonna have one angry stallion that will kick and bite until he knocks the door down again.

Now it’s time to make changes for riders as well. To get where I was going today, I had to transfer to the Santa Monica city bus line. It was heaven. On that line, the bus driver was pleasant, there were seats for everyone, fellow passengers were cordial, there were no roaches and no graffiti. I was on that bus for a very enjoyable 35 minutes.

I got off to transfer to the MTA #4 bus. The first MTA bus passed me by; when the second one came, I had to bang on the door to get in. The hassled driver had a negative attitude. The bus was crowded–no seats left–so tons of people were standing up: It was a dog eat dog atmosphere. There were roaches on the bus and graffiti everywhere.

As a member of the Bus Riders Union Planning Committee, I ask myself continuously when I ride the bus in the outlying areas, “Why is it that the buses are never overcrowded and the drivers have a totally different attitude? Why can’t every person who doesn’t add a car to the roads and pays to ride have a seat? Why do we have to pay so much for public transportation in metro L.A., and we get so little for the price?”

When you hear that we have charged the MTA with a violation of Title VI of the Civil Rights Act, you might assume that the MTA board is all white. Tragically, at the time we brought the suit, five of the thirteen board members were people of color: Richard Alatore, Gloria Molina, Yvonne Brathwaite-Burke, Mel Wilson, Stan Sanders–and African-American CEO Franklin White.

It’s a pathetic situation, but it is reality. Within the Black race, so much of our community consciousness has been bred out of us through the slave days, and we have been taught to think, “I’m gonna get mine, and you get yours the best way you can.” I call this the crab mentality. Because that mentality is brought about by years of training, we have to consciously re-educate ourselves.

The fight today is an economic one. Dominant politics strives to create permanent economic slavery for people of color. The crab mentality fits right in. Look, if it had not been for the protests of the 1960s, Burke, Molina, and Alatorre would never have been elected to public office. Now they are siding with the powers that be–for their own ego or economic gratification–at the expense of other people. I was riding the bus thirty years ago. I’m riding the bus now. Yvonne and Richard have not made it any better. We have to remind them, “The policies that you help to create and implement are not meeting the needs of the people who did the protesting. We are still around. We still have our needs. It is not acceptable for you to sell out the interests of working people!” 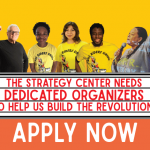 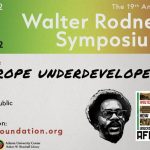 Tomorrow is the big day: The Walter Rodney SymposiumFight For The Souls OF The Cities, Strategy & Soul, The Labor Community Strategy Center, Upcoming Events, VIRTUAL EVENT, Voices from the Frontlines